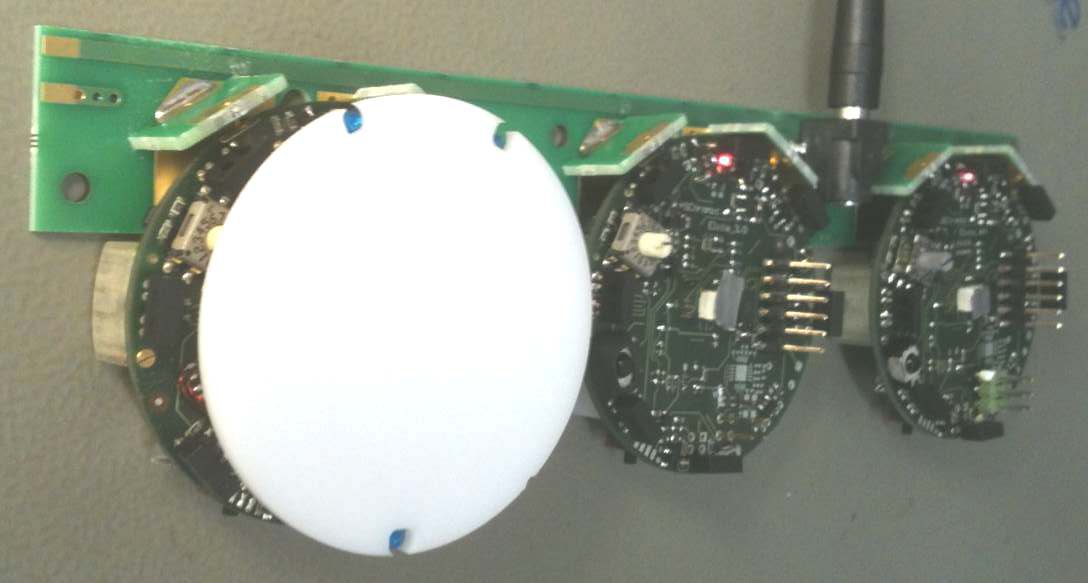 Elisa-3 is an evolution of the Elisa robot based on a different micro-controller and including a comprehensive set of sensors:

The robot is able to self charge using the charger station, as shown in the previous figure. The following figure illustrates the position of the various sensors: 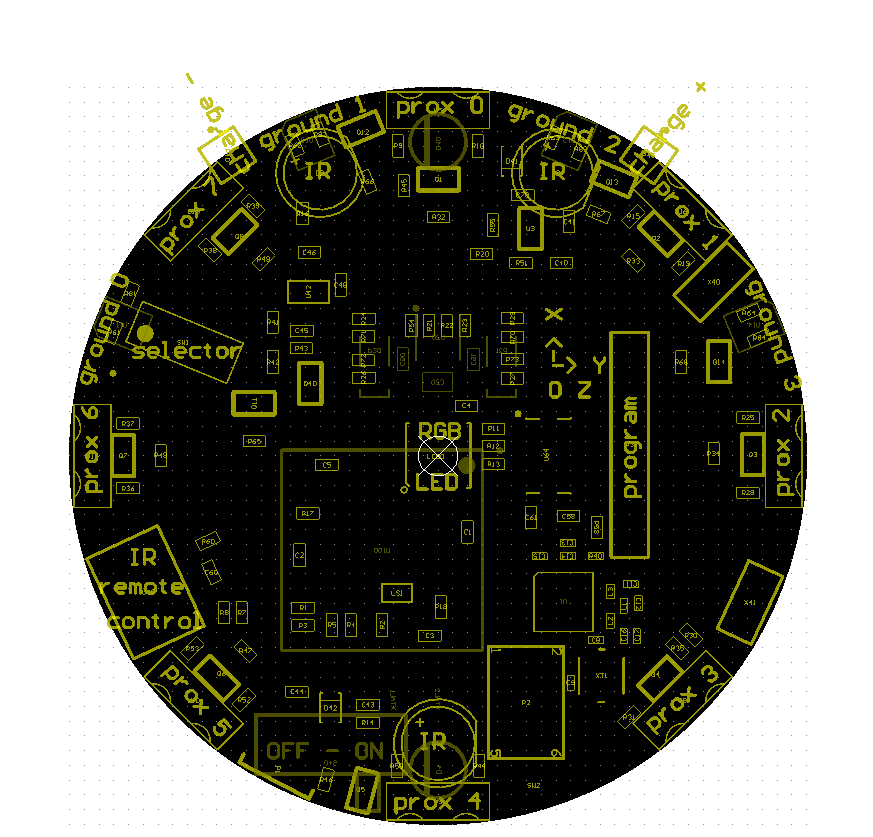 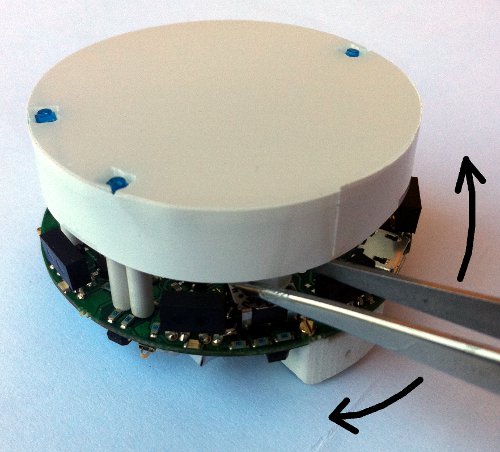 The micro-controller is informed when the robot is in charge and this information is also transferred to the PC in the flags byte; this let the user be able to pilot the robot to the charger station and be informed when it is actually in charge. More information about the radio protocol can be found in the section Communication.

Following video shows the Elisa-3 piloted through the radio to the charging station using the monitor application:

From February 2013 onwards the Elisa-3 is equipped with a new top light diffuser designed to fit perfectly in the 3 IRs emitters of the robot. The diffuser is made of plastic (3d printed), it is more robust and it simplifies the removal and insertion. Here is an image:

Following figures show the main components offered by the Elisa-3 robot and where they are physically placed:

The robot is equipped with two batteries for a duration of about 3 hours at normal usage (motors run continuously, IRs and RGB leds turned on).

radio base-station is connected to the PC through USB and transfers data to and from the robot wirelessly. In the same way the radio chip (nRF24L01+) mounted on the robot communicates through SPI with the micro-controller and transfers data to and from the PC wirelessly. The robot is identified by an address that is stored in the last two bytes of the micro-controller internal EEPROM; the robot firmware setup the radio module reading the address from the EEPROM. This address corresponds to the robot id written on the label placed under the robot and should not be changed. 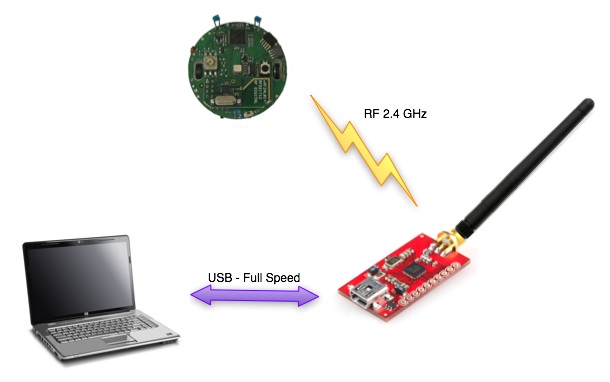 The 13 bytes payload packet format is shown below (the number in the parenthesis expresses the bytes) :

The robot send back to the base-station information about all its sensors every time it receive a command; this is accomplished by using the "ack payload" feature of the radio module. Each "ack payload" is 16 bytes length and is marked with an ID that is used to know which information the robot is currently transferring. The sequence is the following (the number in the parenthesis expresses the bytes):

Pay attention that the base-station could return "error" codes in the first byte if the communication has problems:

Odometry of Elisa-3 is quite good even if the speed is only measured by back-emf. On vertical surfaces the absolute angle is given by the accelerometer measuring g... quite a fix reference without drifting 😉 A fine calibration of the right and left wheel speed parameters might give better results. However the current odometry is a good estimate of the absolute position from a starting point. The experiments are performed on a square labyrinth and the robot advances doing obstacle avoidance. The on-board calculated (x,y,theta) position is sent to a PC via radio and logged for further display.

Details about the code can be found in the advanced-demo project, in particular the motors.c source file. The PC application used for logging data is the monitor.

Since the motors can be slightly different a calibration can improve the behaviour of the robot in terms of manoeuvrability and odometry accuracy. An autonomous calibration process is implemented on-board: basically a calibration is performed for both the right and left wheels in two modes that are forward and backward with speed control enabled. In order to let the robot calibrate itself a white sheet in which a black line is drawed is needed; the robot will measure the time between detection of the line at various speeds. The calibration sheet can be downloaded from the following link calibration-sheet.pdf. In order to accomplish the calibration the robot need to be programmed with the advanced firmare and a specific command has to be sent to the robot through the radio module or the TV remote; if you are using the radio module you can use the monitor application in which the letter l (el) is reserved to launch the calibration, otherwise if you have a TV remote control you can press the button 5. The sequence is the following:

1. Put the selector in position 8 2. Place the robot near the black line as shown below; the left motor is the first to be calibrated. Pay attention to place the right wheel as       precise as possible with the black line

3. once the robot is placed you can type the l (el) command (or press the button 5); wait a couple of minutes during which the robot will do various turns at various speed in the forward direction and then in the backward direction 4. when the robot terminated (robot is stopped after going backward at high speed) you need to place it in the opposite direction in order to calibrate the right motor, as shown below. 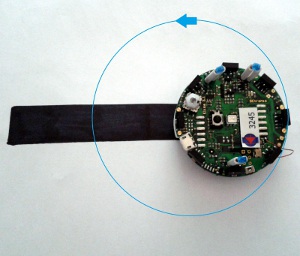 5. once the robot is placed you can type again the l (el) command (or press the button 5) 6. when the robot finish, the calibration process is also terminated.

The previous figures show a robot without the top diffuser, anyway you don't need to remove it!

You can download the documentation from here tracking-doc.pdf. Have a look also at the video:

Some experiments are done with the SwisTrack software in order to be able to track the Elisa-3 robots through the back IR emitter, here is a resulting image with 2 robots: 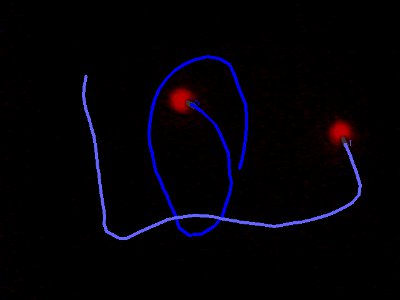 Pre-compiled SwisTrack software (Windows) can be downloaded from the following link SwisTrack-compiled.

The SwisTrack software lets you easily log also the resulting data that you can then elaborate, here is an example taken from the experiment using 5 robots: 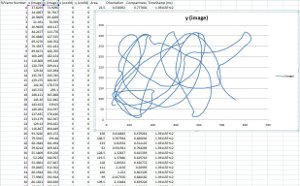 The following video shows the test done with 20, 30 and 38 Elisa-3 robots, the tracking is still good; it's important to notice that we stopped to 38 Elisa-3 robots because are the ones we have in our lab.

We developed a simple position control example that interacts with Swistrack through a TCP connection and control 4 robots simultaneously; the orientation of the robots is estimated only with the Swistrack information (delta position), future improvements will integrate odometry information. The following video shows the control of 4 robots that are driven in a 8-shape. 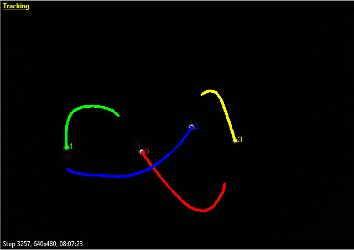 All the following projects require the Elisa-3 library, for building refer to the section Multiplatform monitor.

One of the characteristics of the Elisa-3 robot is that it can move in vertical thanks to its magnetic wheels, thus we developed also a vertical position control that use accelerometer data coming from the robot to get the orientation of the robot (more precise) instead of estimating it with the Swistrack information, you can download the source code from the following link:

We developed also an example of position control that control a single robot (code adapted from previous example) that can be useful during the initial environment installation/testing; you can download the source code from the following link:

Another good example to start playing with the tracking is an application that lets you specify interactively the target point that the robot should reach; you can download the source code of this application from the following link:

The advanced firmware is needed in order to use the local communication. You can find some examples on how to use this module in the main, refers to demos in selector position from 11 to 14. Here are some details about the current implementation of the communication module:

This chapter explains how to use ROS with the elisa-3 robots; the radio module is needed here. Basically all the sensors are exposed to ROS and you can also send commands back to the robot through ROS. The ROS node is implemented in cpp. Here is a general schema:

First of all you need to install and configure ROS, refer to http://wiki.ros.org/Distributions for more informations. Alternatively you can download directly a virtual machine pre-installed with everything you need, refer to section virtual machine; this is the preferred way.

ROS Elisa-3 node based on roscpp can be found in the following repository https://github.com/gctronic/elisa3_node_cpp.

Following steps need to be done only once after installing ROS:

1. If not already done, create a catkin workspace, refer to http://wiki.ros.org/catkin/Tutorials/create_a_workspace. Basically you need to issue the following commands:

2. You will need to add the line source ~/catkin_ws/devel/setup.bash to your .bashrc in order to automatically have access to the ROS commands when the system is started
3. Clone the elisa-3 ROS node repo from https://github.com/gctronic/elisa3_node_cpp; you'll have a directory named elisa3_node_cpp that is the repo local copy
4. Copy the repo directory elisa3_node_cpp (this is the actual ros package) inside the catkin workspace source folder (~/catkin_ws/src)
5. Install the ROS dependencies:
6. Open a terminal and go to the catkin workspace directory (~/catkin_ws) and issue the command catkin_make, there shouldn't be errors
7. The USB radio module by default requires root priviliges to be accessed; to let the current user have access to the radio we use udev rules:

8. Program the elisa-3 robot with the last advanced firmware (>= rev.221) and put the selector in position 15

First of all get the last version of the elisa-3 ROS node from github:

Now you can start the ROS node, for this purposes there is a launch script (based on roslaunch), as explained in the following section. Before starting the ROS node you need to start roscore, open another terminal tab and issue the command roscore.

Open a terminal and issue the following command: roslaunch elisa3_node_cpp elisa3_single.launch elisa3_address:='1234' where 1234 is the robot id (number on the bottom).

If all is going well rviz will be opened showing the informations gathered from the topics published by the elisa ROS node as shown in the following figure: 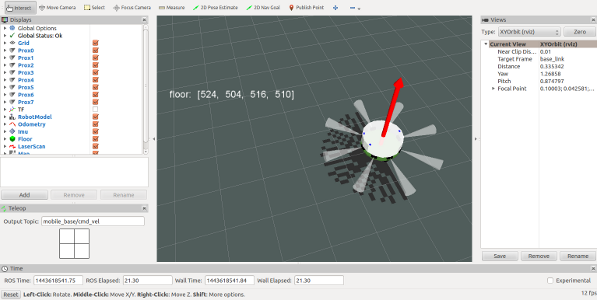 The launch script is configured also to run the gmapping (SLAM) node that let the robot construct a map of the environment; the map is visualized in real-time directly in the rviz window. Here is the video:

To avoid the tedious work of installing and configuring all the system we provide a virtual machine which includes all the system requirements you need to start playing with ROS and elisa. You can download the image as open virtualization format from the following link ROS-Hydro-12.04.ova (based on the VM from http://nootrix.com/2014/04/virtualized-ros-hydro/); you can then use VirtualBox to import the file and automatically create the virtual machine. Some details about the system:

The following videos show 3 Elisa-3 robots moving around in the environment avoiding obstacles thanks to their proximity sensors and then going to the charging station autonomously; some black tape is placed in the charging positions to help the robots place themselves thanks to their ground sensors. The movement and charging is independent of the gravity. It works also vertically and up-side-down.

Following video shows 38 Elisa-3 robots moving around with on-board obstacle avoidance enabled; 15 of them are running autonomously, the remaining 23 are controlled from one computer with the radio module.